Feast of the Ascension of Our Lord Jesus Christ 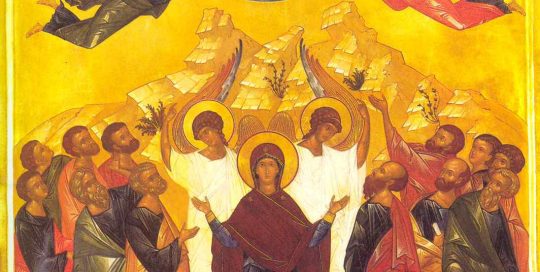 ​As the angels, O Savior, wondered at Thy strange elevation, and the Disciples were amazed at Thy dread rising, Thou didst ascend in glory, being God, and the gates were lifted up for Thee. Wherefore, the heavenly powers were surprised, shouting, Glory to Thy condescension, O Savior; glory to Thy reign; glory to Thine Ascension, O Thou Who alone art the Lover of mankind.

+Orthros of the Feast

On the fortieth day after Jesus was resurrected from the dead, He was taken up into the heavens in a cloud.

“The cloud which today envelopes Jesus and ascends with him to heaven represents the smoke of the sacrifice rising from the altar to God. The sacrifice is accepted, and the victim is admitted to God’s presence where it will continue to be offered in an eternal and heavenly manner. The work of our salvation has been accomplished and is blessed.”

On this day, the Thursday of the sixth week of Pascha, we celebrate the Ascension of our Lord and God and Savior Jesus Christ.

After His Resurrection, Jesus remained on earth for forty days, appearing to His Disciples in various places. He ate, drank and conversed with them, verifying and assuring His Resurrection. On the fortieth day after Pascha, Jesus appeared to His Disciples in Jerusalem. He gave them His last commandment, to go forth and preach in His Name to all the nations. At the same time, He told them not to depart from Jerusalem, but to wait until they were clothed with the power from on high by the descent of the Holy Spirit upon them. Having said this, Jesus led His Disciples to the Mount of Olives. Then He lifted up His hands and blessed them. And as He was speaking to them with words of fatherly blessing, Jesus departed from them and ascended into Heaven, being received by a shining cloud, indicating His divine majesty. He gradually disappeared from the sight of the Disciples as they gazed at Him. And as they stood thus, two angels in brilliant white robes appeared to them in the form of men and said to them: Ye men of Galilee, why stand ye gazing up into Heaven? This same Jesus, Who is taken from you into Heaven, shall so come in like manner as ye have seen Him go into Heaven. In these words is fulfilled and defined the doctrine concerning the Son of God and His Word, in the Confession of Faith. After our Lord Jesus Christ fulfilled all His great dispensation for us, He ascended in glory into Heaven, and sat on the right hand of God the Father. His Disciples returned from Jerusalem from the Mount of Olives, rejoicing in the promise of the coming of the Holy Spirit. O Christ our God, Who didst ascend in glory, have mercy on us. Amen.

The Dormition of the Theotokos Feast Day »