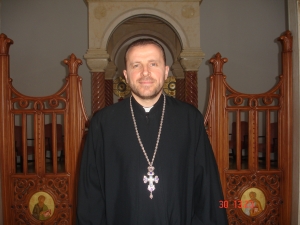 Fr. Elie came from Hekr Elcheikh-Taba, Akkar – Lebanon. He is married to the former Rouba Makhoul and they have three children: Tala, Chadi, and Bassam. Fr. Elie was born on November 21, 1966, ordained deacon in 1994, ordained priest in 1996, and Archpriest in 2002 by His Eminence Boulos, Archbishop of Akkar-Lebanon.